Schmidt’s broad track record in music management includes Kuhmo Chamber Music festival, Helsinki Early Music Week and BRQ Vantaa festival. Her wide experience is particularly focused on early music. She was previously secretary general of Nordem (Nordic early music network), and from 2015-2018 a member of the board of directors in REMA. From 2017 Schmidt has served as a board member of Finland Festivals.

Originally trained as a teacher of history and music, Schmidt holds a master’s degree in musicology. Her management training includes attending the Executive Program in Arts & Culture Strategy at the University of Pennsylvania.

Schmidt was born in Hungary and has lived in Finland since 1986.

In Helsinki Baroque Orchestra Schmidt will be responsible for financial management and further developing the orchestra in close cooperation with the artistic director.

Aapo Häkkinen is Artist of the Year 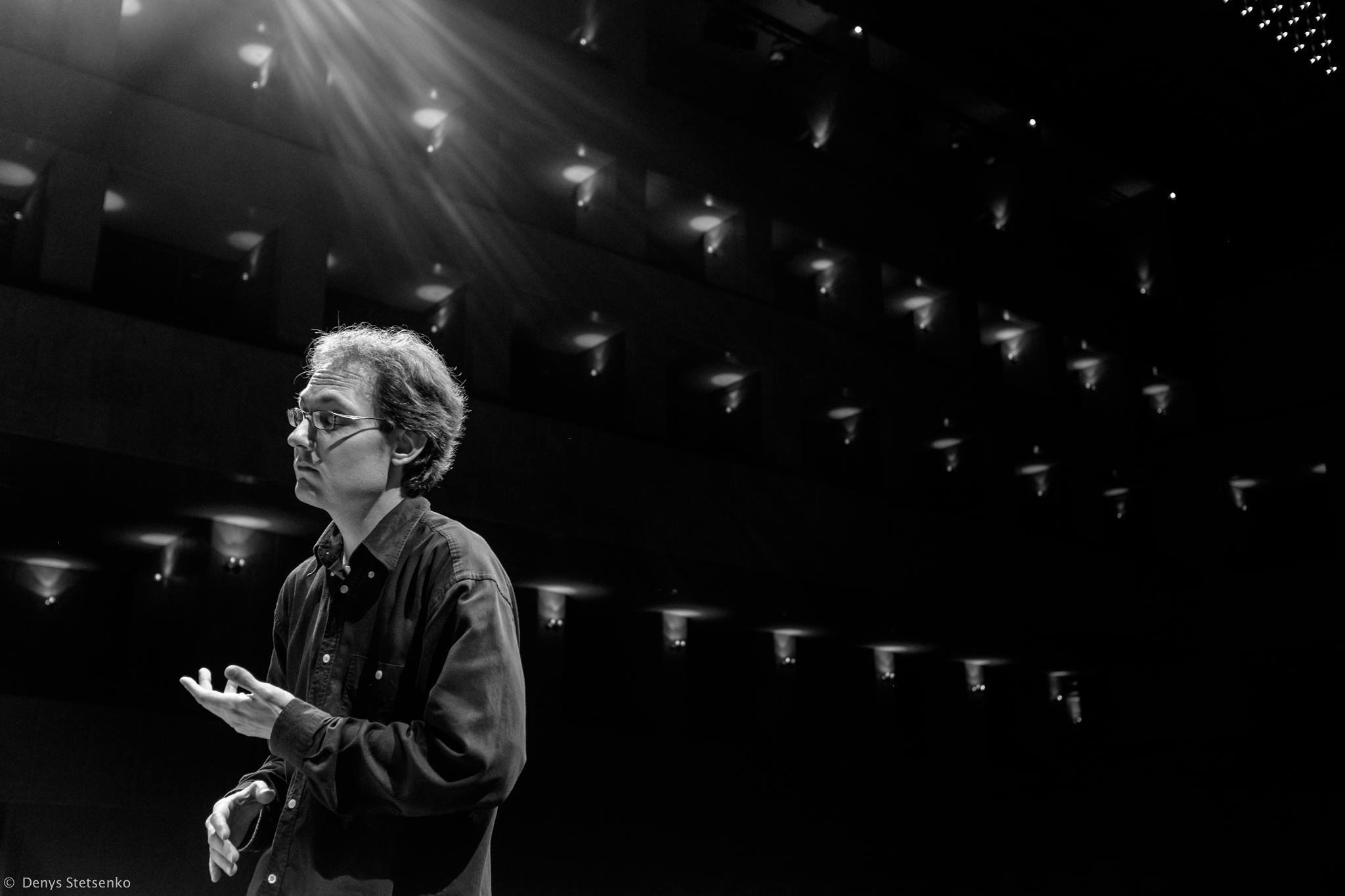 Helsinki Baroque Orchestra’s Artistic Director Aapo Häkkinen has been named Artist of the Year by the city of Helsinki. The prize is awarded annually for artistic merit. This year’s prize specifically recognises the modern premiere of Leopold Koželuch’s opera Gustav Vasa; also a nod to the fact that Helsinki was founded by the historical Gustav Vasa (King Gustav I of Sweden).

New Schumann CD is out!

This recording includes the world première recording of Schumann’s 17-minute Adventlied, Op. 71 for soloists, chorus and orchestra, four choral ballades based on texts by Emanuel Geibel, and Schumann’s version of Bach’s Cantata BWV 105.

Robert Schumann wrote in 1850: “Keep in mind that there are also singers, and that the highest in musical expression is achieved through the chorus and orchestra.” This illustrates well the composer’s desire to write large works for this medium in an attempt to create a new genre for the concert hall. Today, they still constitute the least explored area of his output. The elevated style he was aspiring to (both in the text and the music) was unheard-of outside the realm of church music. In fact, whether for the church, opera, or the concert hall, Schumann was looking for a sanctified realm, a Goethe-inspired meeting ground for art and religion.

Adventlied, Op. 71, was written in November 1848 to a text from Friedrich Rückert’s Pantheon. The sense of urgent need and chromatic writing alternate with lyrical sections and quasi-Handelian grand climaxes in praise of universal brotherhood, featuring the transformed opening theme from time to time throughout the work. Schumann studied intensively approximately 500 works by Bach, including numerous still unpublished cantatas, and took them up again and again in order to “daily confess before this lofty man, and strive to purify and strengthen myself through him.” He conducted in Dresden in February-May 1849 the Adventlied and in July 1849 Bach’s dramatic cantata Herr, gehe nicht ins Gericht, BWV 105, and in Düsseldorf in October 1850 the Adventlied and, in the secular sphere, in November-December 1852 and again in March 1853 the large choral-orchestral ballade Vom Pagen und der Königstochter, op. 140, on texts by Emanuel Geibel. The work’s form bears a close resemblance to symphony. The four ballades are the unquestionable highpoint of Schumann’s modern, pervasively noble epic drama and peculiar way of storytelling.

Helsinki Baroque Orchestra’s production of Leopold Koželuch’s opera Gustav Vasa attracted international media attention. Bringing this forgotten work back to life was seen as a bold and important move, and the utilisation of video technology in the staging was pronounced a success.

According to the Swedish magazine Tidskriften Opera the green screen technology worked seamlessly, and the humour in the visual elements was a welcome counterbalance to the patriotic pathos of the story.

Boris Klepal of the Czech Radio commented on how Aapo Häkkinen highlighted the romantic in the music, leading a deeply-felt performance and strongly emphasising the music’s contrasts. Main soloists Martina Janková, Helena Juntunen and Mario Zeffiri garnered praise, and the overall excellence of the whole ensemble was noted.

The German music publication Orpheus was especially complimentary of the tenderness of the tenor arias, placing Helsinki Baroque Orchestra firmly in the top league of period music in Europe.

The performances ran from March 3–10 in Musiikkitalo (Helsinki Music Centre). A video of the performance is available internationally in YLE Areena until April 2019.

“The Helsinki Baroque Orchestra has a remarkably high level that enabled it to cope with the score, already boasting many features of romantic discourse.”
Boris Klepal, Český rozhlas 5.3.2018

Helsinki Baroque Orchestra with Aapo Häkkinen and Pierre Hantaï have won the prestigious Diapason d’Or award this January. The third volume in the Bach harpsichord concertos series is recorded for AEOLUS.

The Diapason d’Or winners are selected by a jury composed of critics from Diapason magazine and producers from France Musique.

Helsinki Baroque Orchestra will stage Gustav Wasa, the only surviving opera by the Czech composer Leopold Koželuch (1747–1818), in Musiikkitalo (Helsinki Music Centre) in March 2018 – marking the 200th anniversary of the composer’s death. The opera has not been performed after Koželuch’s lifetime. A manuscript score and libretto of Gustav Wasa are preserved at the library of Prague Conservatory, and the material has been edited for the first time specifically for this production.
The opera tells the story of King Gustav of Sweden’s battle against King Christian’s Danish invaders. The international cast includes sopranos Martina Janková, Helena Juntunen and Tuuli Lindeberg, mezzo-soprano Monica Groop, tenors Mario Zeffiri and Niall Chorell, bass Cornelius Uhle, Helsinki Chamber Choir and Helsinki Baroque Orchestra, with Aapo Häkkinen conducting.

Koželuch succeeded Mozart as imperial court composer and conductor in 1792. Gustav Wasa dates from his late Vienna period, but the performance date and circumstances are not known. Scored for full Classical orchestra including three trombones and extended percussion, early Romantic instrumental colours are already discernible in Koželuch’s writing. The entirely through-composed vocal parts constitute another progressive feature for German opera of the time. The libretto is attributed to King Gustav III of Sweden, assassinated in 1792.

The opera is directed by Ville Sandqvist based on Erik Söderblom’s original concept. The semi-staged production will utilise green screen video technology as well as costume, lighting and other technical possibilities available in Musiikkitalo.

New Bach CD is out! 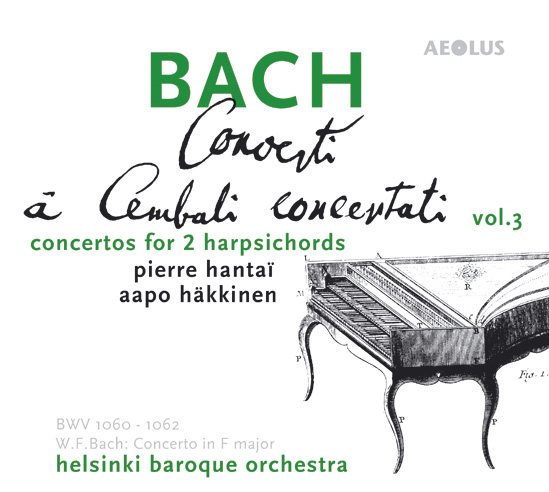 A new installment of Helsinki Baroque Orchestra’s recording series of Bach’s harpsichord concertos has been released. This third volume includes concertos for two harpsichords, played by Aapo Häkkinen and Pierre Hantaï. The recording is produced by the noted German record company AEOLUS.

CDs are available for purchase from Fuga or directly from AEOLUS.

The earlier volumes in the series were enthusiastically received:

Bach, vol. 1
These performances are enjoyable, even thrilling. In the rip-roaring Italian Concerto that rounds off the disc (…) the harpsichord achieves almost organ-like fullness. Wow!
Lindsay Kemp, Gramophone, 3/2013

Bach, vol. 2
One of the true delights is the beautiful phrasing of the upper strings – Bach’s part-writing rarely gets this kind of exposure.
Brian Clark, Early Music Review, 10/2013

This year marks the 20th anniversary of Helsinki Baroque Orchestra. To mark the occasion, a star-studded line-up will perform in the anniversary concert at the Musiikkitalo on September 24. The programme explores the musical connection between Schumann and Bach.

HeBO´s long-standing collaboration with Kristiina Helin, an opera director whose visualisations of contemporary music concerts as well as opera productions are well known, will continue. For the anniversary concert she will create a large thread installation, subtly living with the music.

Aapo Häkkinen, HeBO’s artistic director for the past 14 years, takes his rightful place in front of the orchestra as conductor.

The idea for a baroque orchestra came into being as a student project in 1997. Two decades later, Helsinki Baroque Orchestra is one of the most internationally successful professional orchestras in Finland. HeBO frequently performs in the most highly regarded concert venues both in Finland and abroad: this year the orchestra tours in Europe and Japan. HeBO produces concerts series in Helsinki and Rauma, as well as organizing a summer festival in Janakkala.

Helsinki Baroque Orchestra embarks on an extensive tour of Europe in May. With seven dates in all, the tour opens in Helsinki on May 9th, followed by concerts in Germany, Spain and Belgium.

The programme consists of Mozart, Kraus and Beethoven. The soloist is Sophie Karthäuser, considered a “born Mozartean” and one of the finest Mozart sopranos of our time. René Jacobs, a stalwart of early music, will be conducting, and excitingly, including Beethoven’s symphonies in his repertoire for the first time. 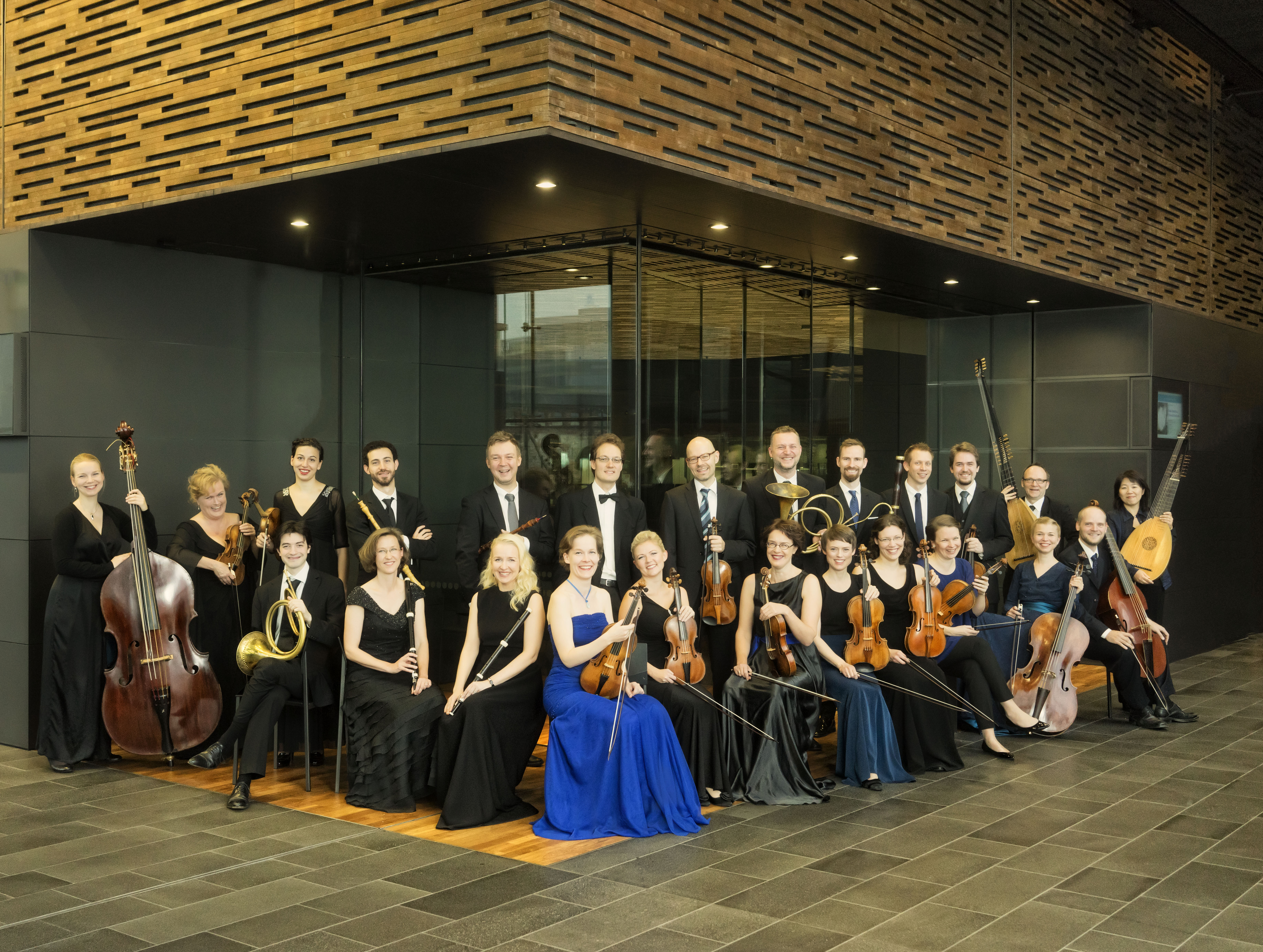 Helsinki Baroque Orchestra breaks new ground this season by touring extensively in Asia. The orchestra has been invited to perform at several notable venues in South Korea, Japan and China.

The first of the three debuts took place already in July and August when HeBO played three concerts at the Pyeongchang Festival in South Korea, directed by Aapo Häkkinen. The soloist was Sunhae Im who debuted in the Early Music Series in Finland in 2014, and is currently based in Berlin. This programme of Bach was also performed in Finland at the BRQ Vantaa Festival.

Coming up in October: the famous Suntory Hall in Tokyo and two concerts at the Bandai Music Festival in Japan, followed by a return to South Korea – this time for two concerts at the Tongyeong Concert Hall. The soloist will be Johannes Pramsohler, a Paris based Italian violinist. In addition to Bach, Handel and Telemann, the programme includes pieces by Johan Helmich Roman, the ”Swedish Handel” with Finnish roots.

The tour concludes back in Finland with concerts on the New Year’s Eve and New Year’s Day. These concerts are part of the official Suomi 100 – Finland centenary celebrations. At the same time, they mark the beginning of HeBO’s own 20-year anniversary celebrations.

Tickets to the popular New Year’s concerts are available from September 26.

Stay up to date